Skip to content
Quickly Browse this Page
Visit Top School Matches Below
Not interested in ?
Consider these options instead:
No thanks, see more options
Quickly browse this page
Home Real Life Dexter: How to Become a Blood Spatter Analyst

Real Life Dexter: How to Become a Blood Spatter Analyst

The hit Showtime series “Dexter” centered on a blood spatter analyst for the Miami Police Department who moonlights as a serial killer. While the show is based on fiction, the job is very real and harder than Dexter makes it seem (probably due to his serial killer instincts).

A blood spatter analyst, a type of forensic science expert, investigates crime scenes and reconstructs crimes based on how bloodstains have formed on various surfaces in order to figure out exactly how a crime was committed.

Blood spatter analysts investigate patterns of blood or blood spatter in violent crimes like murders to find the killer and determine what happened. These forensic scientists can determine the type of weapon, number of blows, placement of both victims and suspects during and after an attack, and the window of time in which the crime probably took place.

The main duty of the job entails collecting and analyzing blood samples, stains and spatter found at the scene. The amount of blood could vary from a trace amount or a large volume, so different techniques are used to process the scene and collect evidence. Blood spatter analysts also write detailed reports on the findings to help detectives hunt down the criminal. The report may also be used in court cases, and analysts are often called on to testify in criminal hearings.

Blood spatter analyst jobs typically take place in the lab, and you may be required to know how to use and maintain crime scene lab equipment. You should have a strong background in forensic science and an understanding of the properties of blood and human anatomy to be able to find work in the field. Some states may also require certification to practice. 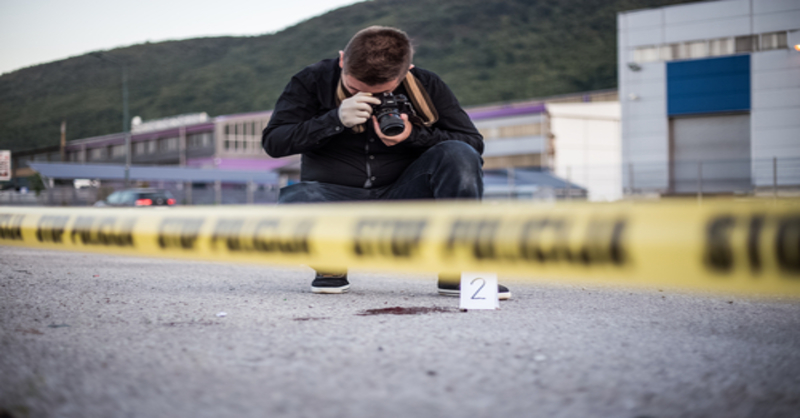 Forensic science jobs all relate to each other; however, not all blood spatter expert jobs are the same.

Also known as bloodstain pattern analysts, you may be able to find an entry-level position working with blood as a forensic technician. In this position, you may collect more samples from crime scenes than just blood, but you will perform many of the same job functions.

Like forensic scientists who analyze blood, forensic serology is a specialty that involves studying bodily fluids found at crime scenes in addition to blood, such as urine, feces, semen, etc. Learn more about becoming a forensic serologist.

How is Blood Spatter Used in Forensic Science?

Like Dexter, blood spatter analysts are a type of forensic scientist that focuses on the blood portion of a crime. In the show, Dexter usually only needs to be at a crime scene if blood was found, and the real-life position is similar. Like a real blood spatter analyst, Dexter is sometimes at the scene of a crime collecting blood samples, sometimes sitting in a lab looking at a screen of data or even testifying in court as an expert to solve various crimes.

Real blood spatter analysts play a huge role by testifying in court to deliver criminal justice, such as in a past manslaughter case of Beverly Littlecrow. According to Saskatoon Star Phoenix, blood spatter analysts’ testimony directly linked killers to the fatal head injury of an Arizona woman. Experts discovered the amount of force and murder weapon used based on the blood at the crime scene, and were able to prove the killer’s story false, leading to a conviction.

However, the job also entails working long, irregular hours and spending a lot of time around potentially hazardous materials, such as body fluids carrying disease. Sometimes, bloodstain experts go on to work in the private sector as contractors or experts for private attorneys to mitigate these risks and potentially earn more money.

Forensic science is all about studying the mess of a crime scene and analyzing the details to identify criminals and convict them in a court of law. There are various types of forensic science jobs, including the following common roles:

Entry-level positions as blood spatter analysts often fall under forensic science technicians, who primarily work in labs and collect evidence at crime scenes. While these roles still explore the links between the scientific evidence and the suspects in the case, technicians often consult with experts in specialized fields or work together until they gain more experience.

According to the US Bureau of Labor (BLS), forensic science technicians earn a median salary of $57,850 per year as of 2017, which O*net reports is expected to increase at an above-average rate of 15% or higher by 2026.

To become a blood spatter analyst, follow the steps below:

1. Earn a degree in natural science, such as biology, chemistry or forensic science. A graduate degree is usually necessary as well. Blood spatter analysts can earn a number of different degrees in forensic science to find entry-level work.

2. Gain certification through your state, if required.

3. Apply for blood spatter analyst jobs. Check out the states with the highest pay or see how competitive the position is near you.

5. Interview for the job and get hired in an entry-level position.

7. Take workshops or classes to stay updated throughout your career.