Skip to content
Quickly Browse this Page
Visit Top School Matches Below
Not interested in ?
Consider these options instead:
No thanks, see more options
Quickly browse this page
Home The State of Inmate Healthcare: Hope for the Future

The State of Inmate Healthcare: Hope for the Future

Healthcare for people in prisons and jails is a right. There have been a variety of initiatives in the past to support that right. In 1976, the U.S. Supreme Court ruled that the deliberate act of ignoring the healthcare needs of inmates is cruel and unusual punishment. In 1983, the National Commission on Correctional Health Care (NCCHC) was established. The commission is an independent, nonprofit 501(c)(3) organization whose early mission is to evaluate and develop policies and programs. And in 2015, the Nelson Mandela Rules, formerly the Standard Minimum Rules for the Treatment of Prisoners, were unanimously accepted by the UN General Assembly.

Unfortunately, these lofty goals have not always been realized. Healthcare for inmates is still a national problem, both in jails and prisons. There are many issues to overcome, but one of the most important is the all-too-common belief that because they have committed an offense, people in prison or jail don’t deserve adequate healthcare.

Luckily, the political climate is changing, and new laws (such as the 2018 First Step Act, discussed below) and initiatives are being introduced. The outbreak of COVID-19 has hastened the implementation of some of these initiatives; it’s sad proof of how disease can spread quickly through prisons and affect not only prisoners but also correctional staff.

Read on to learn about the challenges of this issue and the steps being taken to meet those challenges.

Inmates and the COVID-19 Pandemic

COVID-19 is spreading rapidly in prisons. The Federal Bureau of Prisons reported that as of April 16, 2020, 1,534 inmates and 323 employees in federal prisons tested positive for the virus. In jails, however, the situation is worse for corrections staff. According to a recent survey of 320 correctional facilities, 70% of which were jails, between March 25 and April 3 the highest number of documented cases was among correctional staff—including healthcare staff and correctional officers.

Social distancing is difficult for inmates. In many prisons, inmates share cells. In others, they sleep bunk style, with as many as 35 bunks in one room. Correctional officers often need to have close contact with inmates, and they don’t always wear masks.

However, there is some light at the end of this tunnel. On April 3, 2020, U.S. Attorney General William Barr ordered the Bureau of Prisons to speed up the release of inmates with a high risk of contracting the virus and move more inmates to home confinement. This change will not only help the inmates who are released—it will help the inmates who remain incarcerated since prison populations will decrease.

Many states have already taken similar measures. For example, in New York, up to 1,100 parole violators who are in prison or jail will be released under supervision. In Spokane, Washington, and in three counties in Alabama, courts have authorized the release of some inmates who committed “low-level” misdemeanor offenses and those who are being held pre-trial.

Medical Problems of People Behind Bars

The prevalence of disease and illness in prisons and jails is significantly higher than in the general population for nearly every type of medical issue. Healthcare issues of inmates are similar to those of the general population, but the rates at which they’re affected are sometimes startling.

This graphic shows the comparative prevalence of four types of conditions in the prison/jail population as compared to the general population. More specific information about each type of condition follows. 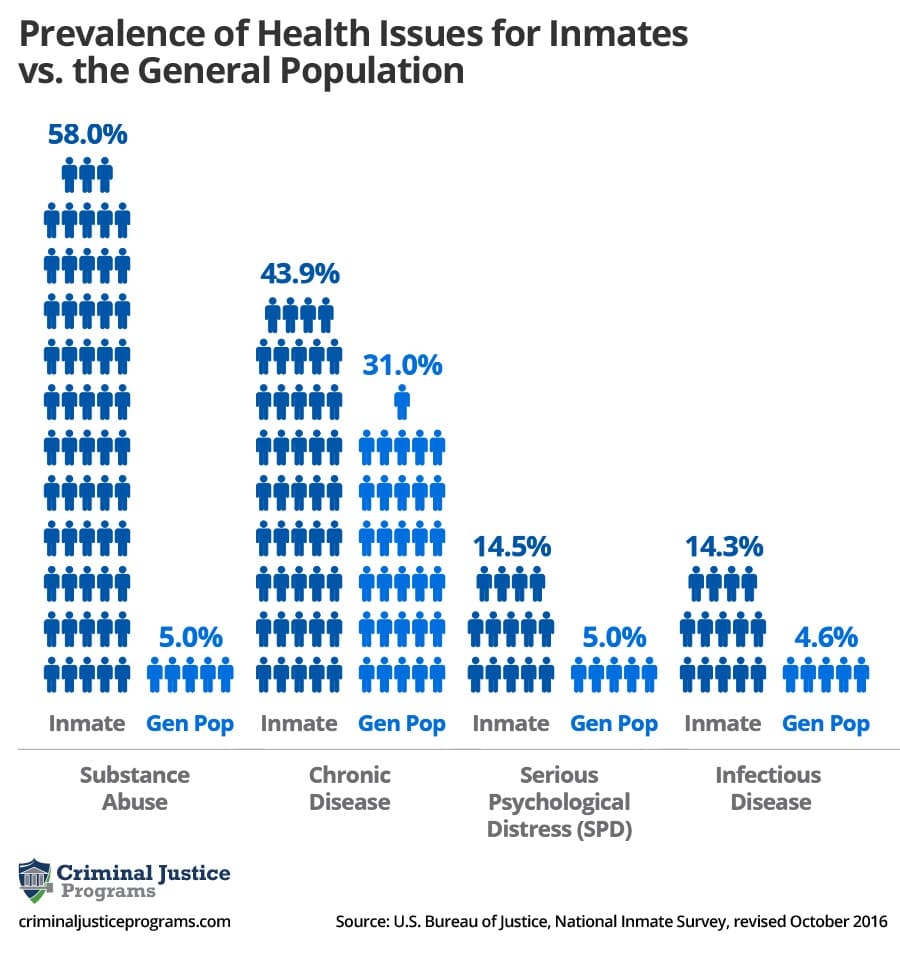 Infectious disease is a major issue in correctional facilities. Crowded jails, limited access to water and soap, delays in diagnosis and treatment, and lack of availability of items such as condoms, clean tattooing equipment, or syringes—all these factors contribute to the high transmission rate of infectious diseases in prisons and jails.

The most common diseases are tuberculosis, HIV/AIDS, hepatitis, and STDs. The Bureau of Justice Statistics (BJS) cited the following statistics in a 2016 report (the latest date for which federal statistics are currently available). 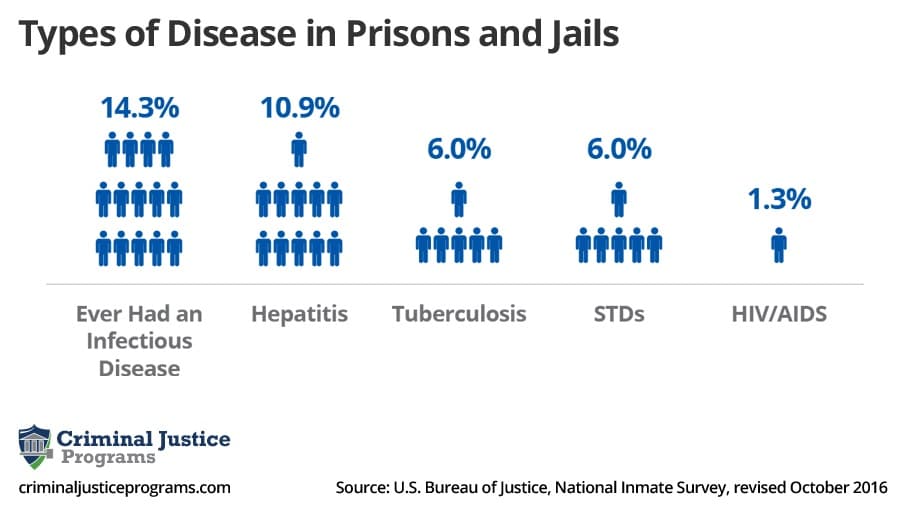 The Center for Disease Control and Prevention (CDC) defines “chronic diseases” as “conditions that last one year or more and require ongoing medical attention or limit activities of daily living or both.” Such include diseases such as diabetes, high blood pressures, asthma, and heart conditions.

Once again, the prevalence of chronic disease in inmates is much higher than in the general public. According to the BJS, an estimated 40% of prisons and jails reported having a current chronic disease, while 50% reported ever having had a chronic illness. Here is a breakdown: 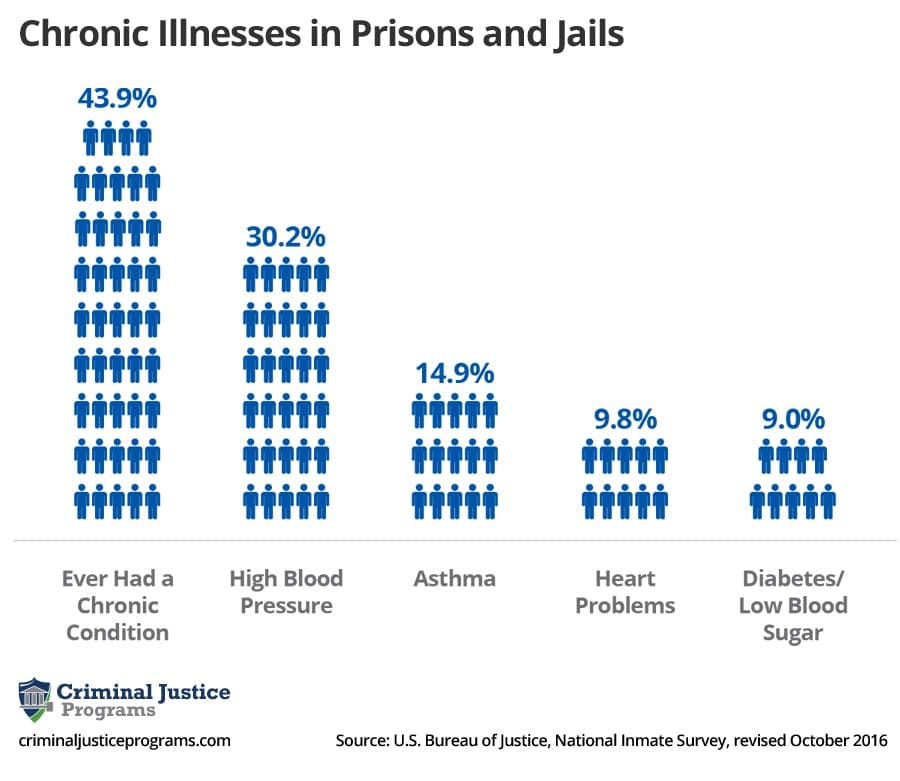 The prevalence of mental illness in prisons and jails is due to many factors. One, of course, is the experience of being incarcerated. But many inmates also have histories of mental illness—36% of prison inmates and 44.3% of jail inmates.

The BJS report found that 14.5% of inmates in state and federal prisons and 26.4% of jail inmates had experienced serious psychological distress (SPD) in the last 30 days. By comparison, the general population experienced SPD at a rate of only 5%. The numbers for women were higher—20% in prisons and 32% in jails.

The National Institute of Mental Health reports that only about 30% of inmates in state prison, 25% of those in federal prison, and 18% in jails received some kind of mental health treatment. Medication was generally the most prevalent form of treatment.

Drug abuse and addiction are rampant in correctional facilities. A major contributing factor is that many people are behind bars due to drug offenses.

BJS reported that 58% of state and federal inmates and 63% of jail inmates either abused drugs or were addicted. The numbers for women were higher—69% for prisons and 72% for jails.

The Needs of Female Inmates

Female inmates have unique medical issues. Pregnancy is an obvious one. At the time of incarceration, 3% to 4% of women are pregnant. In many cases they don’t get the prenatal care that they need.

Women also need feminine hygiene products, but in many prisons incarcerated women have to pay for them. Thus they need to choose between buying these products and other items they need.

And twice as many women as men who are incarcerated have serious mental health conditions. Some of these are caused by abuse or the fear of it.

States are also making changes. As of 2018 15 states had laws mandating that women have access to free feminine hygiene products.

And the overall political climate is favorable. In 2019 Senators Booker and Warren reintroduced the Dignity in Prison for Incarcerated Women. The legislation would make it easier for incarcerated women to receive “trauma-informed” care and free “basic hygienic products.”

With the recognition of the differences between the needs of female versus male inmates, more initiatives for the humane treatment of incarcerated women are likely to become realities.

How Can We Improve the Health of Inmates?

Support for inmate health can come at many levels—federal and state, local, and individual. Following are some steps that can be taken to help ensure the healthcare rights of incarcerated men and women.

There are currently 2.2 million people incarcerated in prisons and jails in the United States. Due in part to the passage of harsh sentencing laws in the 1990s, the prison population has grown by over 500% in the last 40 years. In fact, the United States has the highest incarceration rate in the world.

As a result, many correctional facilities are grossly overcrowded. The consequences of overcrowding on inmate health are far-reaching:

However, the tides have started to turn from the tough-on-crime policies of the 1900s. In 2011 the U.S. Supreme Court ruled that overcrowding prisons is unconstitutional. A number of states responded to this ruling: California reduced its prison population by 36%, and five states—Michigan, Connecticut, Mississippi, Rhode Island, and South Carolina—reduced their prison populations by 14% to 15%.

On a federal level, in 2018 the First Step Act was passed with bilateral support. The act addresses these components:

Although the reasons for reducing the prison populations in the U.S. aren’t necessarily based on healthcare reform for inmates, the results will make a huge impact.

It’s essential that people undergo screening as soon as they’re incarcerated to prevent the spread of disease. The prevalence of testing is mixed, however, and can vary by condition. For example, a correctional health care survey published in 2014 showed that only 19% of prison systems and 35% of jails performed the opt-out HIV testing the CDC recommends (opt-out testing means that all inmates get tested at intake unless they specifically refuse). And according to the American Association for the Study of Liver Diseases, only 16% of prison facilities tested all inmates for hepatitis-C upon entry. The rate in jails is much lower due to a lack of resources and the high turnover of jail populations.

Agencies such as the CDC and Federal Bureau of Prisons recognize the need for testing of infectious disease and, in some cases, have provided guidelines about testing. However, implementing these guidelines will require governmental commitment, partnerships, and sustained financing.

Creating an effective healthcare system in a correctional facility is not an easy task. There are no federal guidelines, and correctional administration professionals aren’t healthcare experts. To determine what procedures to instate, facilities must know what has worked in the past.

The Pew Charitable Trust examined how healthcare is allocated and funded in state-run facilities. An important finding was that policymakers and administrators often lacked the information they needed to build and maintain high-performing prison health care systems. The results of these studies can help correctional facilities make decisions about budget, procedures, and needed resources.

Correctional officers have an incredibly difficult—and sometimes dangerous—job. In the past, their training has focused primarily on security issues. However, that’s beginning to change—and partly at the request of the officers themselves.

According to a survey by Corrections.com, when asked what their top training requests were, correctional officers listed recognizing mentally ill inmates, understanding fitness standards, and learning CPR and other life-saving medical procedures.

Fortunately, training programs to help correctional officers understand and respond to illness are being developed. Correctional administrators are promoting training such as NCCHC’s Health Training for Correction Officers and the CDC’s TB in Correctional Settings: What Corrections Staff Need to Know. Additionally, the American Correctional Association provides certification in Correctional Behavioral Health. Colleges and other schools are also offering certificate programs that address inmate healthcare issues.

These are only a few of the programs available, and there are also local programs created by correctional facilities themselves. The movement toward better training for correctional staff will help ensure that inmates get the healthcare that they need in a timely manner.

Another aspect of education is for inmates. They need to understand their rights, the procedures for accessing healthcare, and the services available. The ACLU National Prison Project’s “Know Your Rights: Medical, Dental, and Mental Health Care” provides information about inmate rights in a number of areas of healthcare. Inmates should make sure to request information about the healthcare system in a correctional facility.

How Family Members or Loved Ones Can Help

If you’re worried that a family member who is in prison is not getting adequate healthcare, there are steps that you can take:

Numerous resources deal with healthcare in prisons and jails. Below we have divided these resources into three areas: government agencies, professional organizations, and advocacy groups. While all provide information about topics in correctional healthcare, each has a slightly different focus.

You can find out about current policies at the federal level from these agencies. They also provide links to local information.

These professional organizations aim to do it all: educate, provide networking opportunities, sponsor conventions, and include a host of links to resources.

There are numerous prison reform groups, but some focus specifically on healthcare. You can go to these sites for information about initiatives, current issues, and ways to get involved.